Lost in Place: Why the persistence and spread of concentrated poverty–not gentrification–is our biggest urban challenge.

A close look at population change in our poorest urban neighborhoods over the past four decades shows that the concentration of poverty is growing and that gentrification is rare.

While media attention often focuses on those few places that are witnessing a transformation, there are two more potent and less mentioned storylines. The first is the persistence of chronic poverty. Three-quarters of 1970 high-poverty urban neighborhoods in the U.S. are still poor today. The second is the spread of concentrated poverty: three times as many urban neighborhoods have poverty rates exceeding 30 percent as was true in 1970 and the number of poor people living in these neighborhoods has doubled.

The result of these trends is that the poor in the nation’s metropolitan areas are increasingly segregated into neighborhoods of concentrated poverty. In 1970, 28 percent of the urban poor lived in a neighborhood with a poverty rate of 30 percent or more; by 2010, 39 percent of the urban poor lived in such high-poverty neighborhoods. The data, methodology and results of our study are spelled out in our full report, available in PDF format here. The highlights are as follows:

Our analysis focuses on the 51 largest US metropolitan areas–all those with a population of 1 million or more in the latest Census. The following tables summarize, by metro area, the key variables in our research–the number of high poverty neighborhoods in 1970 and 2010, and the numbers of neighborhoods transitioning between various categories over time.

Listen to the author speak about the report on Think Out Loud, Oregon Public Broadcasting, December 9, 2014:

The Strong Towns Podcast also had the author on to speak about the report.

For people interested in tracking the performance of a single metropolitan area across all of our measures of concentrated poverty, we offer a Metro-level dashboard. You can select an individual metropolitan area and see how it performs on each of our indicators.

Finally, you can drill down to the level of individual census tracts to examine population change, and the change in the number of persons living in poverty in each metropolitan area covered in our report. (See the full-sized version here)

You can also see the findings in this easy-to-share infographic: 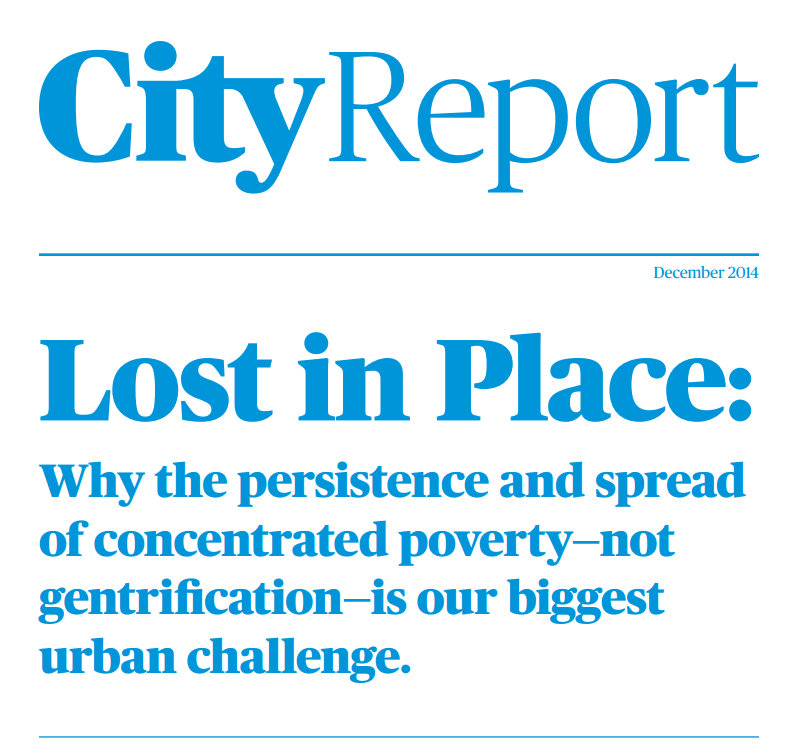 Lost in Place: Why the persistence and spread of concentrated poverty--not gentrification--is our biggest urban challenge.