In a nation increasingly divided by race and economic status, where our life prospects are increasingly de ned by the wealth of our zip codes, some American neighborhoods are bucking the trend.

We identified the nation’s most diverse, mixed income neighborhoods using Census data on the race, ethnicity and household income of neighborhood residents. For each of more than 31,000 urban neighborhoods, we computed a Racial and Ethnic Diversity Index (REDI), which corresponds to the probability that any two randomly selected individuals in a neighborhood would be from different racial/ethnic categories. (Using Census data, we tabulated the number of white, black, Asian, Latino and all other persons in each neighborhood). We used a similar approach to compute an Income Diversity Index (IDI) which measures the variety of household incomes. Neighborhoods that ranked in the top 20 percent of all urban neighborhoods nationally on both of these measures were classified as diverse mixed income neighborhoods.

Which cities have the highest levels of diversity and mixed income?

Nearly all of the nation’s largest cities have at least one neighborhood that meets our definition as being both racially and ethnically diverse and mixed income. Three large cities–New York, Los Angeles and San Francisco account for nearly half such neighborhoods, but some smaller cities also rank high in the fraction of their population living in these diverse, mixed income neighborhoods.

Which cities are performing up to their potential?

Where are the most diverse, mixed income neighborhoods?

Detailed maps of the location of diverse, mixed income neighborhoods for each of the nation’s 52 largest metropolitan areas are available here. These on-line maps enable you to see the patterns of diversity in each metro area, and drill-down to the census tract level to inspect data for individual neighborhoods.

A growing body of social science research confirms the importance of diversity to economic success. Greater socioeconomic mixing is facilitated in neighborhoods that re ect America’s racial and ethnic diversity, and which offer housing that is affordable to people with a range of incomes. In a series of studies led by Stanford’s Raj Chetty and his colleagues at the Equality of Opportunity Project, racial and economic segregation have been shown to reduce intergenerational economic mobility (the probability that children of low income families will, as adults, earn higher incomes than their parents). A recent post at City Observatory presents a synopsis of the literature on this subject, with citations to key works.

For a long time, we’ve known that neighborhoods of concentrated poverty are toxic to the life prospects of children who grow up there. Rothwell and Massey have shown that your neighbors’ educational attainment is nearly half as large as your parents’ educational attainment in shaping your life prospects. Living in a neighborhood with greater diversity and a mix of incomes generally means that families enjoy better-resourced public services and civic assets (including schools, parks and libraries) and develop stronger, more diverse social networks. Diverse, mixed-income neighborhoods are a platform for helping kids from lower-income families to escape poverty and realize the American dream.

We’ve laid out our data, methodology and more detailed findings on our analyses of racial and ethnic diversity, and of income diversity in our technical report “Identifying America’s Most Diverse Inclusive Neighborhoods.” 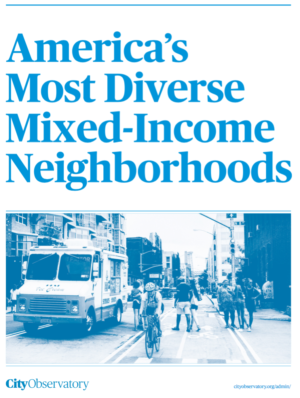