The movement of talented young adults to dense urban neighborhoods isn’t waning, it is widespread and accelerating, and it is powering urban revival.

Cities continue to be magnets for talented young adults The number of well-educated young adults living in close-in urban neighborhoods is increasing in every large US metropolitan area, and this trend has accelerated in recent years.

City Observatory’s new report—Youth Movement: Accelerating America’s Urban Renaissance—shows that the growth of close-in urban neighborhoods in the US since 2010 has been propelled by the accelerating movement of well-educated young adults back to the city.

There’s no evidence that this powerful momentum has been blunted by Coronavirus concerns. In April, the market share of search activity for urban locations increased in 29 of the 35 largest US metro areas, while search activity for suburban locations decreased in all 35 of the largest metro areas, according to data gathered by Zillow. Independently, ApartmentList.Com reported an actual increase in searches for apartments in New York City, in April, concluding: “The pandemic is not scaring renters away from New York.” Despite pronouncements to the contrary, there’s no sign people are looking away from cities.

Smart young adults concentrating in cities: Well-educated young adults are three-and-half times more likely to live in close-in urban neighborhoods, which the report defines as census tracts within 3 miles of the center of a region’s principal central business district. The trend is remarkably widespread: The number of well-educated adults living in close-in urban neighborhoods increased in every one of the nation’s 52 most populated metropolitan areas since 2010.

In addition, the rate of growth of this key demographic in city centers has accelerated to a pace faster than the previous decade in four-fifths of these large metro areas. Slower growth in recent years is due to supply constraints.

While some analysts have noted a slowdown in central city growth, there’s little evidence that the “young and restless” are disenchanted with cities. If anything, its likely that population growth in these neighborhoods is constrained not by a lack of demand, but by a lack of supply: it’s been difficult to build enough housing to accommodate all those who’d like to live in these neighborhoods, with the result that rents have gone up. Some of the most popular cities for well-educated young adults—like New York and San Diego—have experienced slower rates of growth in the young and restless compared to the 2000-2010 period, most likely reflecting limited housing supply and rising rents.

The movement of young people to cities has been the foundation of urban economic vitality. Former Seattle Mayor Mike McGinn attributes his city’s robust growth to its attractiveness to young adults:

“The return to cities after the decades long destruction wrought by freeways, urban planning and redlining is testament to their enduring qualities over the centuries. Seattle didn’t add population because Amazon chose to expand here. Amazon (and many others) chose to expand here because that is how they competed for talented young people who want to live in diverse, progressive and vital places.”

“While many have predicted “urban flight” we see no such evidence in search activity on Zillow, where the suburbs are actually experiencing a falling share of national search traffic even on homes for rent. Our past research and that of other economists on natural disasters and other traumatic events, really don’t support the idea that our preferences change that fast or that we hold onto the anxiety after the risk has passed.”

If anything, the heightened awareness of the need for more public space, for walking, cycling and to allow social distancing, is making the case for more investment in our cities, especially as we look to the future. Carol Coletta, President of the, Memphis River Parks Partnership points out:

“What feels remarkable to those of us who lived through the devastating effects civil unrest had on cities in the Sixties, recent protests seem only to have solidified the feelings of community and the embrace of diversity that come so much more naturally from city living. Clearly, many Americans want to be part of that. It points to a desire to lean in to city living rather than turn away from it.”

Meanwhile, even the hardest hit center cities, places like Detroit and Cleveland, have recorded noticeable increases in well-educated young adults living in close-in urban neighborhoods since 2010.

Detailed data for each the 52 largest US metropolitan areas is available in an interactive dashboard: www.cityobservatory.org/ym-dashboard. 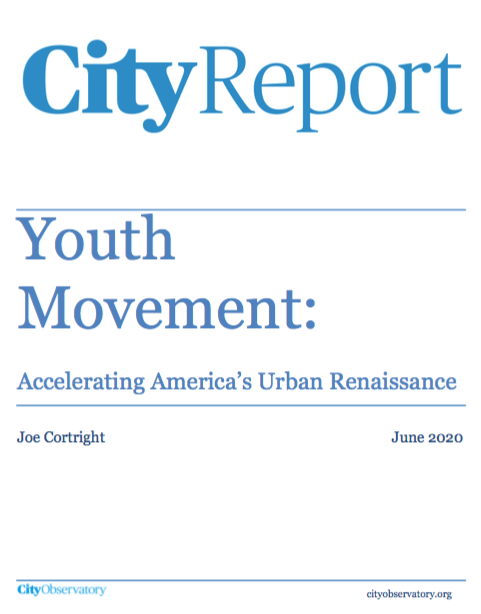