The essence of cities is bringing people—from all walks of life—together in one place.  Social interaction and a robust mixing of people from different backgrounds, of different ages, with different incomes and interests is part of the secret sauce that enables progress and creates opportunity.  This ease of exchange underpins important aspects of our personal lives, civic effectiveness and economic development.

But over the past several decades, a number of trends–some social, some economic, some political, and others technological–have interacted to dramatically change the ways, the places, and the amounts of interaction between different groups in our society.  By many measures, we now spend less time in social settings, and are less likely to regularly interact with people whose experiences are different from our own.  In our schools, communities, work, shopping and personal activities, we’re increasingly separated from one another.

Our new report, Less in Common, surveys a wide range of measures of how Americans have grown apart from one another over the past several decades.  We’ve intentionally drawn promiscuously from a variety of fields to illustrate the breadth and variety of ways in which this trend seems to be unfolding.

Many of these changes are reflected in the physical landscape of our cities.  In North America, development patterns, particularly the growth of suburbs after World War II, diminished access to an easily shared urban life.  Space and experiences became more private, fueled by suburban expansion, large lots, and the predominance of single-family homes. These development patterns have resulted in Americans having “less in common.”  This phenomenon appears to play out in many different ways:

Distrust among Americans is increasing.  A key marker of social capital that is regularly used in comparing nations and tracking trends over time is the generalized feeling of trust.  The General Social Survey reports that the share of the population that says “most people can be trusted” has fallen from a majority in the 1970s, to about one-third today.

Americans spend significantly less time with their neighbors.  In the 1970s, nearly 30 percent of Americans frequently spent time with neighbors, and only 20 percent had no interactions with them.  Today, those proportions are reversed.

The biggest portion of our leisure time is spent watching television.  TV watching is up to 19 hours per week today compared to about 10 hours in the 1960s.  We spend less time socializing and communicating.

Our recreation is increasingly privatized.  Since 1980, the number of members of private health clubs have quadrupled to more than 50 million.  We used to swim together—prior to World War II, almost all pools were public.  Today, we swim alone in the 5 million or so private swimming pools compared to just a few thousand public ones.

Driving alone has become the norm, with transit reserved for the poor. Today, 85 percent of American commuters travel to work in private automobiles, up from 63 percent in 1960.  Carpooling has fallen by half since 1980, and the share who commute via transit has declined from 12 percent in 1960 to less than 5 percent today.

Economic segregation trends upward as middle-income neighborhoods decline. High-income and low-income Americans have become more geographically separated within metropolitan areas. Between 1970 and 2009 the proportion of families living either in predominantly poor or predominantly affluent neighborhoods doubled from 15 percent to 33 percent.

There are some counter-trends to the general pattern of isolation and separation.  Racial segregation, though still high, has declined steadily for decades. New community spaces—like farmer’s markets—have grown rapidly.  Widespread availability of the Internet combined with social media has made it easier and more democratic to connect with others and with all forms of information.

A broadly shared sense of common interest, anchored in a society that promotes social mobility and easy interaction, is a vital underpinning of effective political institutions and the economy.  If we’re going to make progress in tackling a range of our nation’s challenges, and live up to our full potential, we need to reinvigorate the civic commons.

You can also see the findings in the form of an easy-to-share infographic: 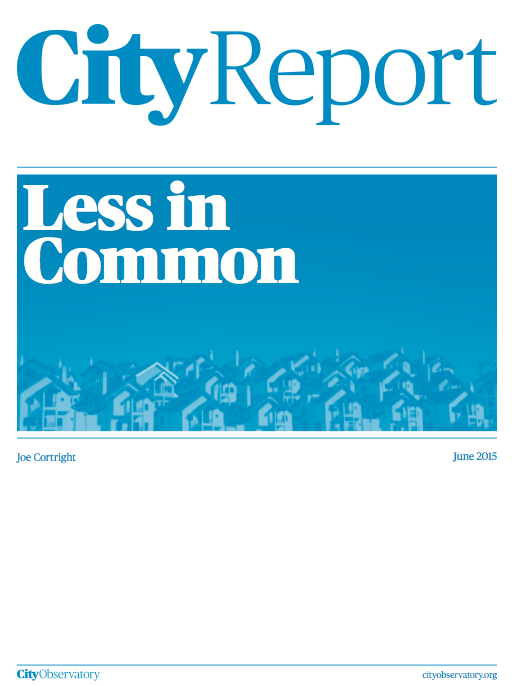